The ways we connect – big or small – to the children, families and adults in our lives improves individual well-being and our community overall. Stories of how everyday connections are making a difference are coming soon!

Science shows that connections matter, but testimonials are real-life proof! Share your story below! Please note that the stories you send could be shared publicly to promote the Connections Matter NC effort.

Paying it forward: that’s what Robert Roy does every day in his job as an After-Hours Social Worker with Durham County Department of Social Services.

Robert grew up in an inner city neighborhood and now helps families realize their dreams. He chose to work in the Child Welfare field because he loves to engage with the entire family. Robert believes his calling in life is to help others. 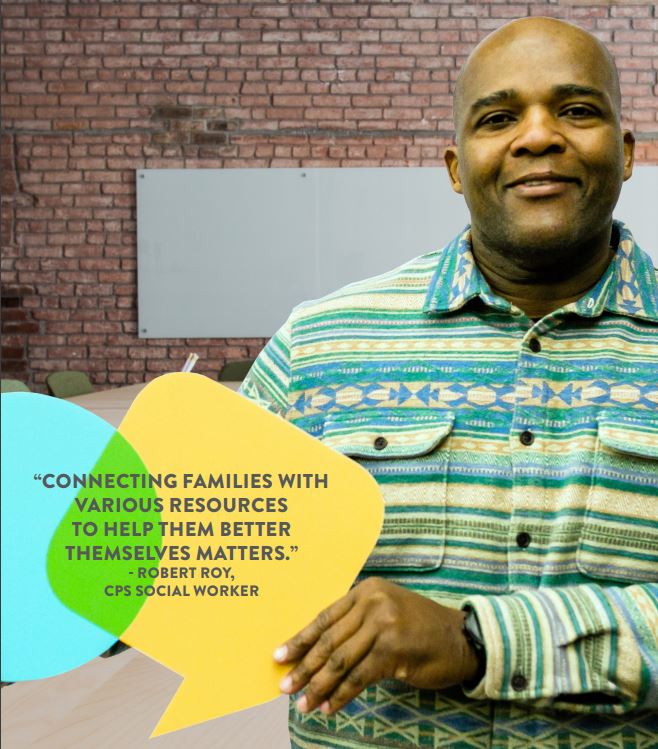 “I get my most joy when I’m able to make someone smile or happy when they are down,” said Robert.

That love and joy likely sparked from the influence of positive role models in his life, including his oldest sister, Sabrina. She was a school principal who was invested in her students’ lives, not just academically, but personally. Robert remembers his sister buying clothes for students in need. Sabrina’s goal was to provide those students with the same level of education and respect as students in middle- and higher-income level schools.

Robert experienced his biggest growth in middle school. He credits his teacher, Chris Inserra, for this. Robert says she taught him and his classmates things that “truly opened [their] eyes”. Robert learned sign language, met Chris’s family, and visited places outside his neighborhood.

“She showed us a whole different life,” said Robert. Chris Inserra installed values of caring for others and helping your fellow citizens.

Ultimately, Robert’s sister and his middle school teacher were the positive connections who inspired him to work with low income families.

Now Robert feels like he has the responsibility to pay it forward.

“I need to spread the love and support that I have received throughout my life to others,” Robert said.

Robert hopes to be that one person who makes a positive change in the life of a child.

“When I’m able to see a child smile or having a parent who’s able to exhale as they realize that there are people who’s interested in assisting them and their family,” Robert said, “that keeps me motivated.”

Take our free, online trainings: Recognizing and Responding to Suspicions of Child Maltreatment and What is Prevention!

Sign up to receive updates on our upcoming events and latest news.